Welcome to my income report for September 2019

In September I have earned $269 in total. About 16% more than in the previous month.

This is due to multiple one-time sales I made on craigslist.

What I did in September

In September, I was fully committed to a new project in Vienna at my 9-5 job. Since I have to travel abroad and live in hotels, I didn’t have any energy left to work on my side projects.

Therefore September was for the most part an unproductive month. At least I managed to do some coding on weekends and regular copywriting in the mornings when I am not in Vienna.

But there is one thing I am proud of. I finally recorded myself on the camera. Being alone in a hotel room in a foreign city makes you do the thing you would never try at home, like recording your first youtube vlog video.

It was a scary feeling to hear my voice and to see my face in the camera. But after many hours of trials and errors I got used to my voice and learned:

My throat was sore and my voice sounded like a breathless old man, but I feel much more confident when talking in front of other people. It is a priceless life lesson everyone should try regularly.

We will see. Now I have to edit the video, add an intro, and make a compelling vlog video. Wish me luck.

In September, I finally started to use The Hustle every day. Only after migrating from Toggle to The Hustle, I realized how buggy the app was.

I spent a lot of time smashing bugs like duplicate IDs of the tasks. Various errors when posting and updating data via Django Rest Framework. Or missing default user data, that caused the whole thing to crash in the browser.

I am glad I didn’t let anyone register yet, because it would be a disaster. Only after fixing the most critical bugs, the app became usable. Now I have to use it every day so I can get the grasp of the most annoying UX pain points.

At the time of writing this post, my Good House Music Youtube Channel grew to 23 subscribers. A 9% increase over the previous month.

Because I was abroad, I could not keep my rendering and mixing schedule. The result is a stagnation in the number of both views and impressions. Youtube algorithm just don’t like when you neglect your channel.

That being said, I am still happy, that someone is listening to my mixes. And since there is not much I can do, I will just continue doing mixes and treat it like a hobby.

My finance niche site was completely overlooked in September.  But at least I managed to add P2P products and incorporate risk metrics to a portfolio allocation calculator.

The only way further is to increase the number of impressions from the google search engine. And it cannot be done another way than to create quality content. I have to yet write and publish my second blog post. I already put together a keyword list I want to target in my next blog post.

In October, I want to:

For charts and numbers, click on my new Open page 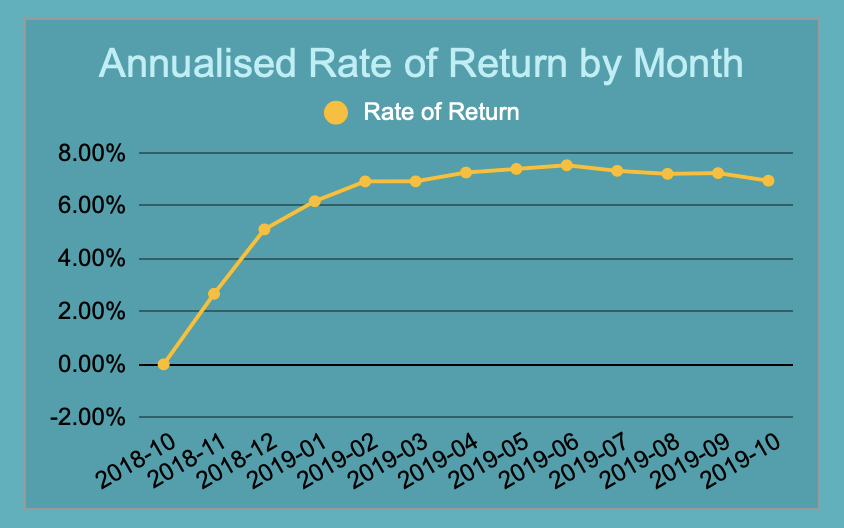 My P2P Lending activity is on a decline. First I got busted by new banking regulation, that requires two-factor authentication whenever you log into your wallet.

This annoying fin-tech direction became valid since the second week of September and it broke my P2P lending bot. Whenever I request an auth token, I got an SMS with authentication code, that is then used to retrieve the token.

I cannot use the code to authenticate myself by login into the website, It has to be submitted to API. But I have no idea how to implement this in python.

Until I figure it out, I will have more and more money laying in the wallet doing nothing and my return will dip the same way it did in June when I was traveling and my bot was inactive for a month.

In October, I want to:

The situation in the savings market was relatively calm. Unfortunately, there was no promotion campaign offering sign up bonuses so my income from savings dipped as well.

In September, I managed to make three sales, PC RAM, skateboard, and a scientific calculator. After two months of no sale, I was happy to get rid of some of my unused stuff.

PC RAM was a long term dead stock. I put RAM on sale more than a year ago after my bro upgraded his gaming desktop. No one wanted it, because DDR3 is quite old technology and for the same price, you can get the same RAM size, but with faster DDR4 technology.

Luckily, there was a guy, who wanted to upgrade his old company desktop and was able to drive to Prague to make an exchange. First, he made a lowball offer. I didn’t want to play his game, but eventually, we agreed to 95% of my original price.

Skateboard was laying in my closet for decades until I dug them up and put on sale. I bought 2 them in the supermarket when I was in primary school, so it is not a pro skateboard, was dirty, and had a scratched deck.

Nevertheless, some random girl bought a pink one. She was shocked to see its real appearance, but was afraid of me, put money in my hands, and ran away.

I bought a Scientific calculator to conduct a CFA Level 1 exam last year, but I failed miserably. My exam score ended just a margin below the acceptable threshold. I wasted more than 1000 USD on the exam, hoping one day I might add a fancy professional title behind my name.

But to be honest, who am I trying to impress here? Yes, working in private equity or asset management sounded like a dream years ago. It is prestigious, you work with big money and pay is usually good. But, you have to first pass 3 exams and pay more than 3000 USD, if you are good enough to pass them on the first try.

Also, I forgot to mention, that most students spend at least 300 hours on each exam. So the amount of time sacrificed is enormous. Now the question is, do I want to be a corporate slave with CFA title or build an investment/venture capital company myself and hire other CFA’s to do a dirty job for me?

Working in investment management is not a dream anymore. I tried, I failed and moved on things I am more suitable to do, like entrepreneurship.

But back to the point. I sold the calculator to someone, who works as an investment manager in a big utility company and who is preparing for CFA exams. He even overpaid the original price. I was a bit envy, that he made it into the industry, but I was glad this chapter is behind me.

My goals stay the same. Release The Hustle to the public, start a new personal Youtube channel and maybe begin to learn iOS programming.

Wish me luck and see you next month.