Welcome to my income report for August 2019

In August I have earned $232 in total. About 30% more than in the previous month.

This is due to multiple one-time bonuses, that come from opening new bank accounts.

What I did in August

In August, I continued to hustle 24/7. I knew I will be starting a new project in Vienna at my 9-5 job in September, so I won’t have much time and freedom to work on my side projects.

Therefore I immersed myself to do as much as possible, but unlike the previous month, my goals in August were less clear.

I was a little burned out from beta launching The Hustle, so I couldn’t force myself to develop it further and preparing it for the Producthunt launch.

Instead, I focused my time on more fun, but maybe irrelevant projects, like developing my proprietary real estate valuation tool, or completely redesigning my blog.

This is another level of procrastination, that is usual among developers and serial entrepreneurs. The excitement from starting a new project always wins over the thought of finishing the old ones.

Since The Hustle has been beta launched, I didn’t have much motivation to develop it to the next level. Partly because I saw no traction from my Tweets and my post on Indiehackers. With no traffic going in, it is hard to invest any free time at all.

And I am still waiting to be listed on the Beta list. Who knows if it works out. Until then, it’s too early to think about launching on Producthunt.

So I checked my Betalist dashboard and my submission was rejected. The reason might be, that I am using generic Bootstrap CSS styles. This means I won’t be launching on Betalist and have to move forward toward the Producthunt launch.

What I managed to do in August was making web-design responsive, which is super-important for mobile users. I don’t know how many visitors I lost due to broken design, but I got penalized by google search engine.

I also published my first blog post, which is a repost of my evergreen article Can you reach your potential while still young? , an eye-opening testament, that started it all.

One content piece is not enough though and I need to publish at least 30 articles to get any organic traffic. For your imagination, It took me almost a year to publish 30 articles on this blog.

At the time of writing this post, my Good House Music Youtube Channel grew to 21 subscribers. A 10% increase over the past month.

The number of subscribers is not growing as fast as I wish, so I am beginning to experiment with various marketing tweaks, that will hopefully bring more subscribers.

For example, I completely changed my video thumbnail design. My old thumbnails were all over the place with the title of my channel, a music style description, and the name of the mix.

I considered it too overwhelming, so I reduced the youtube video thumbnails design to music style description, the name of the mix, and a video purpose.

I got the idea of adding video purposes after doing some research on the top ten most viewed music videos on youtube. All had one thing in common. They expressed their purpose in the video thumbnail.

Then I remembered, that every-time I was looking for a music video on youtube, I always did it on purpose. For example, when I was at the gym, I looked for a house music mix, that would pump me up.

Of course, different people search for music videos in different situations. So far I identified the most applicable ones: workout music mixes, car music mixes, and homework music mixes.

Unfortunately, I cannot target the most popular one, chill out and relax music mixes, because I don’t play that kind of music. Maybe I might add some deep house mixes sometime in the future.

In September I would like to publish my first french funky house mix.

My finance niche site continued to struggle with getting any traffic. There are 3 reasons, why new sites like Financia get no traction.

First, my domain is still young and is probably sandboxed by Google search engine. Second, I stopped promoting my website on social media, so I get no direct visits. Third, I have more than 70 pages indexed, but all of them can be considered to have thin content.

Again, there is no quick-fix solution and the only way forward is to build quality content, which will take years of hard work.

Regardless, I managed to do a few things, that might help me to get more traffic. Like adding blog functionality into the Flask app. Now I can write content in Markdown language, add a Markdown file into Git repository and publish it online with one Git command.

I also published my first article, which was written with keyword research in mind. I thought it will be an immediate hit because I followed SEO best practices to the last point, but after three weeks, its rank floats between 60 and 70.

The last thing I added to Financia in August is my real estate valuation tool. I did it purely for myself and I don’t expect anyone to use it, so put it behind a paywall with a steep price. If someone subscribes to the service then great. If not, I won’t mind.

In September, I want to achieve many things:

I’m mentioning my blog in the Income report because I worked hard on its redesign for more than 3 weeks. It all started when I wanted to make my homepage responsive.

While I was in the middle of redesigning the header, I faced some technical issues with the collapsible navigation bar. I could not figure out the solution so I had to ditch my current WordPress template and redo the whole website on top of the new template.

I had so much fun doing everything from scratch again because I had a chance to add pages, that I always wanted to have, like the Open page, Travel Page, or Books and Tools page.

Hope you will like my new design, which is more mobile-friendly and should be faster than ever.

For charts and numbers, click on my new Open page 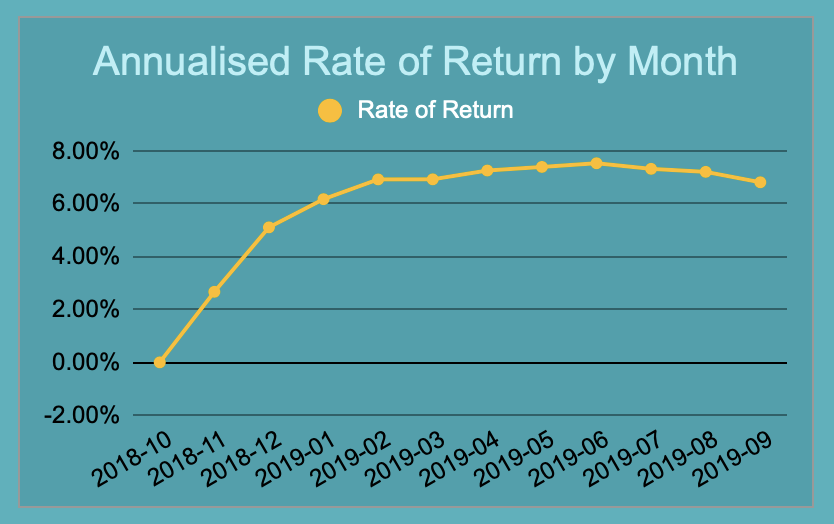 Due to the increasing number of defaulted loans, I decided to sell all risky, but healthy loans with rating B and above on the secondary market for a 1% discount. Except delayed and defaulted ones, because the P2P Platform won’t allow me to sell them.

Right now, I feel much more comfortable having a less risky portfolio. 40% default rate on D rating was crazy high and it was stupid to invest in them in the first place.

In September, I don’t plan to increase my allocation into P2P loans, so I postponed exploring Mintos and other foreign P2P lending platforms to the next year.

In August I opened two new bank accounts and as a result, got multiple signs up bonuses. Without one time bonuses, my revenue would be even lower compared to the previous month.

Banks are aware of the upcoming economic downturn and try to lure as many new clients as they can. Interest rates will be floating, or even decreasing in the long term, so my passive income from savings will become lower as well.

I have to think of other fixed-income revenue sources, like inflation-protected bonds, dividend stocks, or real estate. All of them have many disadvantages, mainly long term lock-up of the capital or high market risk.

Affiliate is my new source of passive income. I am glad I can finally add this revenue source as I always dreamed about monetizing my blog with affiliate marketing.

In August I earned my first dollar from affiliate marketing sale. It is not much, but it is passive. I don’t expect to make a bank from it, but earning 10 USD a month would be a great achievement.

What I want to achieve until the end of the year is releasing The Hustle to the public, finish real estate valuation minimum viable product and start using it on daily basis, start a new personal Youtube channel and maybe begin to learn iOS programming.

Wish me luck and see you next month.